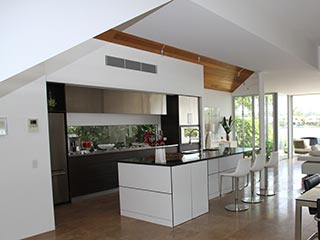 Air ducts that aren’t getting cleaned regularly won’t just give you bad air quality and potential health risks. Dirt, dust, and rust also reduce your heating, ventilation, and air conditioning (HVAC) system work much harder for the same results. That not only means higher electricity bills, but also more mechanical wear and tear on the system, and the risk of overheating. So, how does this happen, exactly? The basic cause and effect occur from multiple things:

The inside of an air duct is designed to be very sheer and smooth. That starts to change as dust and other pollutants stick to the surfaces and build up atop one another. In more humid weather, there can also be issues with water accumulation, which further changes the shape of the duct passage. Moisture also causes dirt to stick together more along the duct walls and may cause rust. Rust, like any other flaking, drops more particles onto the bottom parts of the ducts and creates small protrusions and deformities along the sides. During periods when you aren’t using the fan often, cobwebs and insect residue can also start appearing in the ducts, creating even bigger obstructions.

The smoother and less jagged a surface, the less momentum air loses as it passes along it. That’s why they make air ducts and ventilation tubes so smooth in the first place! Anything that makes the interior of the ducts rougher and more uneven will slow down the airflow. The more that this happens, the more energy the fan needs to expend to push the air through. A thin layer of dust on the sides will only slow the air a little, but the more it builds up the bigger a difference it makes. What’s more significant is the effect of dirt on grates and filters. A filter screen that gets covered in dirt turns into a wall that the motor has to work even harder to force the air through.

How Not To Overwork Fans and Motors

Anything that makes the fan have to turn work harder to push the same amount of air through the ducts will hurt its energy efficiency. Obstructed or uneven duct surfaces cause this to happen. Blocked filters and vent grates cause even more of it. On top of that, a buildup of dust inside the ducts can also affect the functioning of the HVAC motor directly. Dirt building up on the fan blades and (especially!) in the motor slows them down considerably. The harder the fan has to turn to fight against obstructions, the more dust gets kicked up near itself, leading to more motor clogging. The losses in energy efficiency can start to snowball from this point!

Studies suggest that dust buildup in ventilation ducts can lead to a loss of efficiency of up to 11%. Once the motor starts having issues due to dust-induced blockage and overheating, that rises to over 20%. Energy costs aren’t the only problem with this; you’re also begging for mechanical failures sooner rather than later in these conditions! You can prevent problems with a little knowledge and effort.

Get in contact with us for the best prices and results when it comes to Malibu air duct cleaning and care.

Have any questions? We can help! Leave us your contact information below and someone from our team will get back to you as soon as possible.

With our team at your service, your satisfaction is always guaranteed. You can count on our professionals for outstanding quality and perfect results!

Please fill in your details below:

The service was successfully scheduled!

Thank you for choosing our company! Feel free to browse our website for more information in the meantime. Our team at Air Duct Cleaning Malibu is at your service any time!